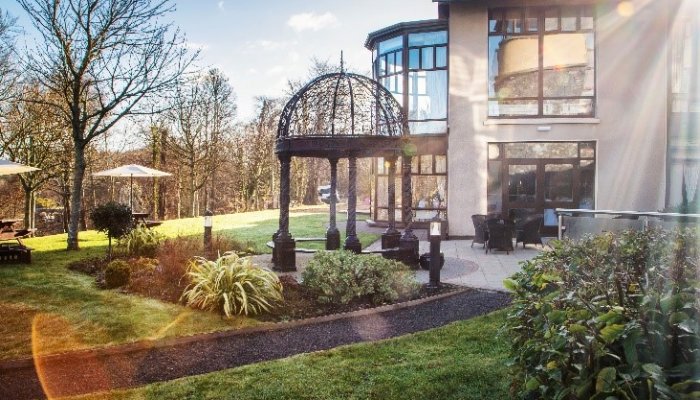 The Westport Woods Hotel – What has been done regarding environmental awareness?

The Westport Wood’s Hotel began it’s journey with 57 bedrooms 23 years ago. Since then a lot of construction work began and changing the hotel completely: a leisure centre was added, the bar rebuilt and extended, a spa was built, the function room and the kitchen were extended and 65 bedrooms added

Ten years ago the Hotel was aiming to make a change regarding their sustainability and play a part in conserving the environment. Considering all the construction work made, the environmental plan goals have been mainly achieved. The energy declined from 2.9m kWh in 2002 to 2.3m kWh in 2017 due to new energy saving light bulbs throughout the whole hotel. Big window fronts were installed to achieve less use of the heaters and reduced heating costs. The waste decreased from 240 tons in 2003 down to 49 tons in 2017 because of a more efficient waste management system, e.g. the composter “Big Hanna” which was in use until last year. The water consumption dropped at first but due to the construction work it slightly increased. Overall the carbon emissions reduced by 65% and the hotel is aiming to be carbon neutral. Not only the hotels sustainability increased but also significant cost savings were made.

Just surround the hotel you’ll see the effects of an arboriculture programme including 2,000 new hardwood trees leading you into a wonderful woodland with a lake view – great for a short natural walk and to unwind. The hotel also does weddings which are just magnificent with this beautiful setting. The Playtop playground surface for kids is comprised of recycled car tyres and runners while the adventure area uses natural tree bark.

Why Book With Us?

Best Price Online Book online with the hotel for the best rate online!

Breakfast Incuded Our delicious breakfast is included with every booking

Location Your ideal base to explore the Wild Atlantic Way

Book Your Stay
Why Book With Us?

Best Price Online Book online with the hotel for the best rate online!

Breakfast Incuded Our delicious breakfast is included with every booking

Location Your ideal base to explore the Wild Atlantic Way